History of the Montessori Program in the Juneau School District:  In 1994, an AMI-trained Montessori teacher and 17 students joined the School District to become Juneau’s first public Montessori classroom, serving grades 1-4.  Two years later, this class was split into two classrooms, a lower elementary class (grades 1-3) and an upper elementary class (grades 4-6).  An adolescent program for grades 7 & 8 was added in 2005.  The program has continued to grow to its current configuration of 6 classrooms: two lower elementary, two upper elementary, and two combined Adolescent classrooms.

After being located in various schools throughout the district, over the years, in the fall of 2009, the Montessori Program was provided it's permanent home in the Marie Drake building, downtown.  There are approximately 135 children currently enrolled in the program.

Who Was Maria Montessori?

Maria Montessori (1870-1952) was the first woman in Italy to become a physician. She also studied engineering, and did advanced studies in anthropology. She then immersed herself in the study of children and how they learn, and contributed greatly to the burgeoning field of child psychology.  She first worked with developmentally disabled children and devised new materials and methods to help them learn.  Later she turned her attention to all children and applied her skills, talents and experiences to create what is known as “The Montessori Method.”

She held a deep belief in the potential of each child to develop their intellectual, emotional and physical powers, with a balance of freedom of work through fostering self-discipline.  She trained teachers, supervised programs for children, wrote numerous books about her theories, was nominated three times for the Nobel Peace Prize, and gave birth to an international movement for peace and education which has evolved and flourished throughout the world. 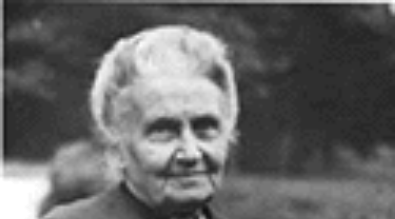